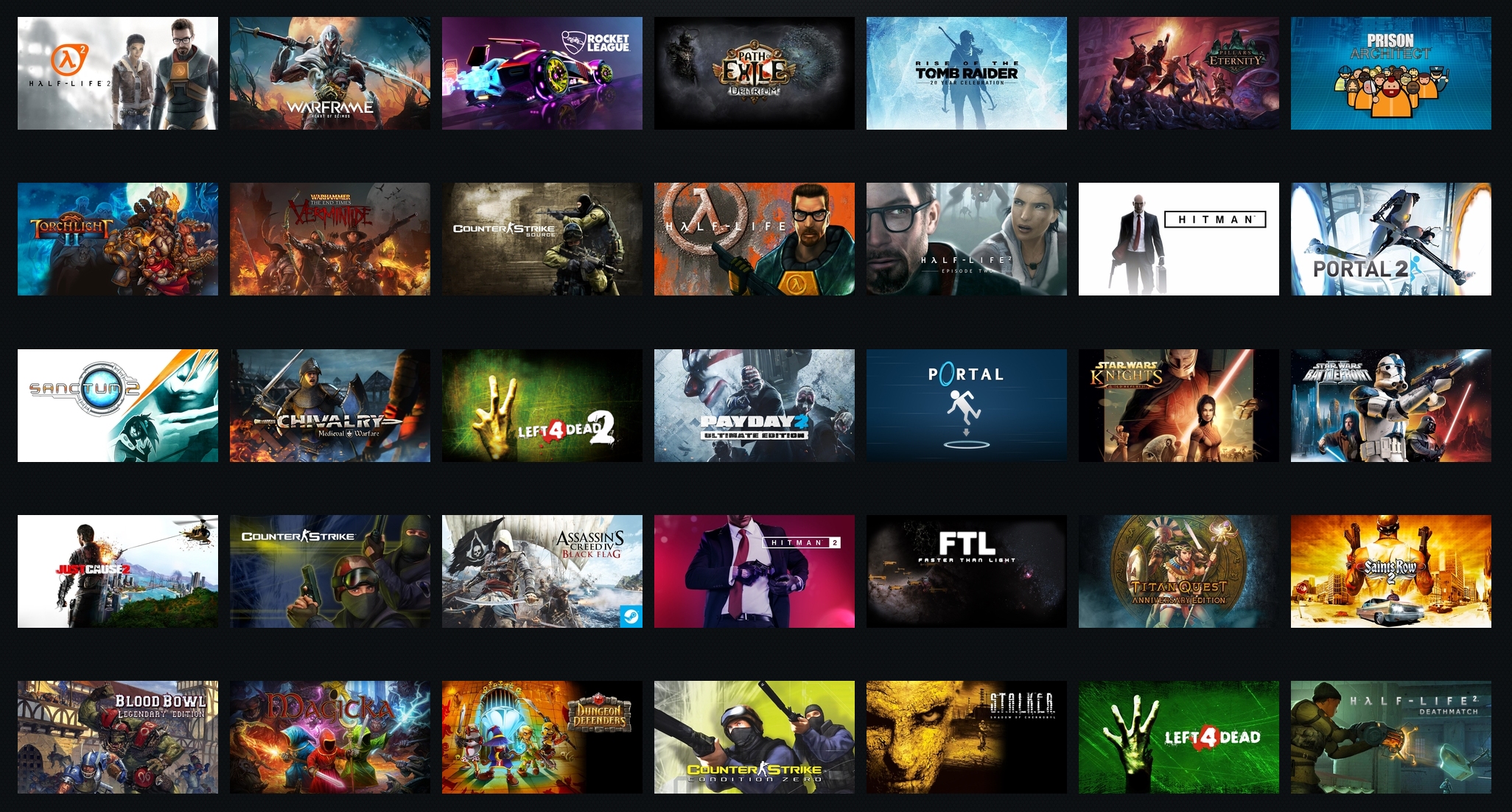 I've previously look at Stadia, which impressed me technically, but I don't really like the business model (pay for service+pay for games on top). GeForce Now is a competitor with a better model (pay for games, and pay for additional features), with the added bonus that (in theory) games you've already purchased from other services can be brought in. Publishers have been a little unhappy about this, however now some Steam games are appearing on the service...so I downloaded the app to see how it looked.

Currently 36 of my Steam Games, from a library of 200, are available on GeForce Now...that's not as bad as it seems, as a lot of the games on there are (to all intents and purposes) junk...bought as part of a pack, or DLC/campaign additions (for example Dawn Of War is 4 games on the list). These days I virtually never play PC games...since lockdown my desk has become a work-only zone, and gaming is conducted on consoles (90% of which is the Switch), so my Steam library is very out-of-date. More and more I'm of the opinion that PC gaming is over-priced in hardware terms (I've done all sorts of calculations around cost vs time vs practicality). I'm scheduled to buy a new laptop next year (on my normal 3-year cycle), and so it's time I had a real think about what I'm buying hardware for.

My first opinions of Geforce Now are...it's a little strange. The initial journey is very smooth...downloading and installing the app...logging into my nVidia account (I already had one for the drivers for my eGPU), linking my Steam account etc. When I went to launch a game it diverged from Stadia in terms of clean journey. I was very obviously booted into a virtual machine, and had to log into Steam on that (the actual app), including a 2FA check. Then I had to "install" the game I'd selected (Hitman 2 in this case). It downloaded/installed virtually instantly, but it's still a strange thing to have to go through. I did a basic setup (moved off WASD to 8456, as is my sinister way), noted that it would not support the native res of my primary monitor (3440x1440) ...not sure if this is a limit of the free service, or some other complexity relating to ultra-wides (addundum - it's a limit of the service right now), but then I was in. I ramped up the graphics settings as much as I could (why not, it's not my hardware running it!).

There were some visible compression artifacts, however I was on Wifi on the 2.4Ghz network, and the app had already warned me this was sub-optimal. With a bit of tinkering I could have connected to the 5Ghz network instead...but at the same time it was entirely playable, and looked pretty good. The screenshot here is a raw dump of the 1920 x 1200 footage. It looks a little soft from compression, but it was smooth and no noticeable lag.

Going back in again took me through the Virtual Machine experience, however I was then already logged into Steam, and the game was installed for me...still not the seamless journey Stadia had, but this is a free service. The 2 upgrades you get for the paid service (currently £5/month) is no max login time (1 hour on the free service) and RTX support. So £60/year to "rent" a high-end GPU...if you work on the normal 3-year hardware cycle, and current GPU card costs, that suddenly looks a really good deal. I could definitely see myself buying a laptop that supports my non-gaming requirements (good CPU, lightweight, basic video encoding support) and using this instead. I think, realistically, a hard-wired internet solution may be needed (and we've already looked at that...if the "work from home" thing becomes long-term, I think running cables to the upstairs offices from the inbound connection downstairs would make a lot of sense, we get some "interesting" wifi issues around 9-10am when pretty much every house in the neighbourhood turns on all their devices and log in).

Can I see this sort of thing being the defacto solution in 5 years? Well yeah, I can actually. We are just about to start round X of the console wars, and I could well believe this is the last hardware console war you ever see, the costs are going up and up to improve the hardware...and yet consoles are significantly cheaper than PC's for equivalent power. We'll soon see how much the GTX3xxx range costs (£1500+ is my bet), and when you start looking at that, suddenly £50/year is sounding like a really good deal. Microsoft have xCloud in the wings, and as they are currently losing the next-gen hype-train war, it could well be that they instead pivot to a service model instead...their one benefit over Sony is the Azure Cloud platform they have been building up for years. Having an 1kg ultrabook as a full gaming machine on the go is a big selling point for me...using any available screen (a TV, a monitor, your phone, the laptop itself) is really compelling. I'm not screaming out for ultra-high FPS, my twitch reflexes went a decade ago, but convenience is definitely a bit plus. It could well be the next "hardware war" is network based, with Wifi 6 coming in, as well as "struggles to go through a paper bag" 5G network services. Or just run some network cables through your house...

Comparing Stadia and GeForce Now? I think GeForce Now is the better one currently...using existing game libraries, and now having such a hard dependency on separate hardware like the Stadia controller. The actual experience is not as slick as Stadia on PC, with the cloud/remote machine nature of the service being more exposed. That can be cleaned up though, and the motivation is clearly there from them.

Can I see this sort of thing being the defacto solution in 5 years?

I completely agree. Streaming is definitely the future and MS might do well to partner with Steam to bring across people's libraries. I think these platforms will become more slick and will replace hardware consoles too. I don't really notice £5 a month but would notice a new console coming out.

As an outlier, I'll be keeping my machine for now but I can see that machine-in-cloud is definitely a thing that will happen in the future. Computer-As-A-Service is definitely on the way.

The only people I can see keeping local boxes is true eSports peeps where 250fps+ and zero latency is a must. Even then, it's notable that one of the gaems available on Geforece Now is League of Legends (from a company who refused to put their games on consoles, as it would not provide the right experience), which is pretty much the poster-child of eSports, and pretty much the biggest PC game in the world. Pretty much all eSports tournaments this year have been online rather than arena-based (China and Korea were back in arenas for early summer, but have recently moved back to online again as Covid resurgencies pop up). Setting up a private server with a "tournament" level contention rate, connectivity and settings would be viable (streaming 250fps to 10 people might be a big challenging though, even at a lower resolution).

I suppose you could argue that if everyone is on the same server hardware, then the only variable is connection speed, and most eSport teams operate from a base which will already have top-end connectivity. I've seen some lag issues, but far less than you'd expect. Maybe future graphics cards will be more focused on high-speed decompression rather than rendering triangles.

Globally I think there is still a good market for having home boxes because of internet still being quite patchy. This is largely down to the way they handle contention - keeping up bandwidth while nuking latency. Unpredictable latency causes all sorts of lag issues in games.

One quick addendum...during my lunch break (a posh name for haivng some soup in the kitchen) I insalled the Android app on my (cheap adn somewhat aging) Honor Play phone, due for replacement soon. The interface is not wonderful (again having to go via a VM Steam installation), but I was able to run the benchmark on Tomb Raider, using the default settings (I don't have an Android-compatible gamepad...or rather I might, but not one I've bothered to sync up). 100fps is rather surreal on a phone...especially as it's higher than the screen refresh rate.

I tried this myself a while back (also tried hitman 2 :D) and was reasonably impressed with the realitive ease of use low price point (free is pretty good even with the limitations there) and the business model of just supplying access to the games you already own rather than the stadia model of trying to sell you the games again and at higher prices.

I still think it's a bit early in this sort of tech the infrastructure to support it is not quite there yet but it's definately going to be much more common in future. A lot of the places where you might want to use it just don't offer the sort of bandwidth required to make it work.

I feel like Stadia is already a dead service as it stands there are already superior versions of it from competitors running with Geforce now and the upcoming Xcloud that microsoft are going to throw into game pass for free a service that already offers pretty incredible value for money.

Too much too early? Just the bad idea?

The big challenge for any company looking to get into the games store market... virtual or installed...is that Steam existed a decade ago, and everyone has a huge library there. Nvidia didn't even try to compete, they just offered a virtual machine to use your existing library with. Epic are spending millions in free games to build up that historical library for everyone. Microsoft are offering a Netflix style access to a big library while you pay.Google did none of these, and didn't offer enough to compensate for the lack of games.

I still think that long term streaming games is the future...maybe pure, maybe with a clever upscaling box at the consumer end (DLSSv3 is looking clever...that combined with a lower res stream could make a powerful combo) could make mobile AAA gaming a reality. I don't think Google will be leading the way though...for mobile gaming (proper gaming, not mobile phone shit) no-one has ever gotten close to Nintendo, and tech wise Nvidia have all the toys right now. I'm wondering if the Switch 2 will be the mass market streaming platform...it's unlikely, but Nintendo have a good track record of taking platform risks

I wonder about steam offering their own streaming option (they already have some local streaming tech for sending games over a local network to another steam machine or a tv with the old steam link box) it would probably negate geforce now at least their paid options. They seem more focused on local play with actual hardware at the moment what with steam deck