Like a lot of people, I've spent the last 3 months doing a lot of video calls/presentations/meetings etc. I'm quite lucky that I have a decent setup already (including a HD webcam, a Logitech C920)...however I've found that running OBS alongside multiple apps can give my laptop a hard time. What I'd like to do is run a second machine (I have a spare laptop), and then use that for the video compositing/output, and use my main laptop for doing actual work. THat would require a Video Cpature Card, which is obviously quite expensive... 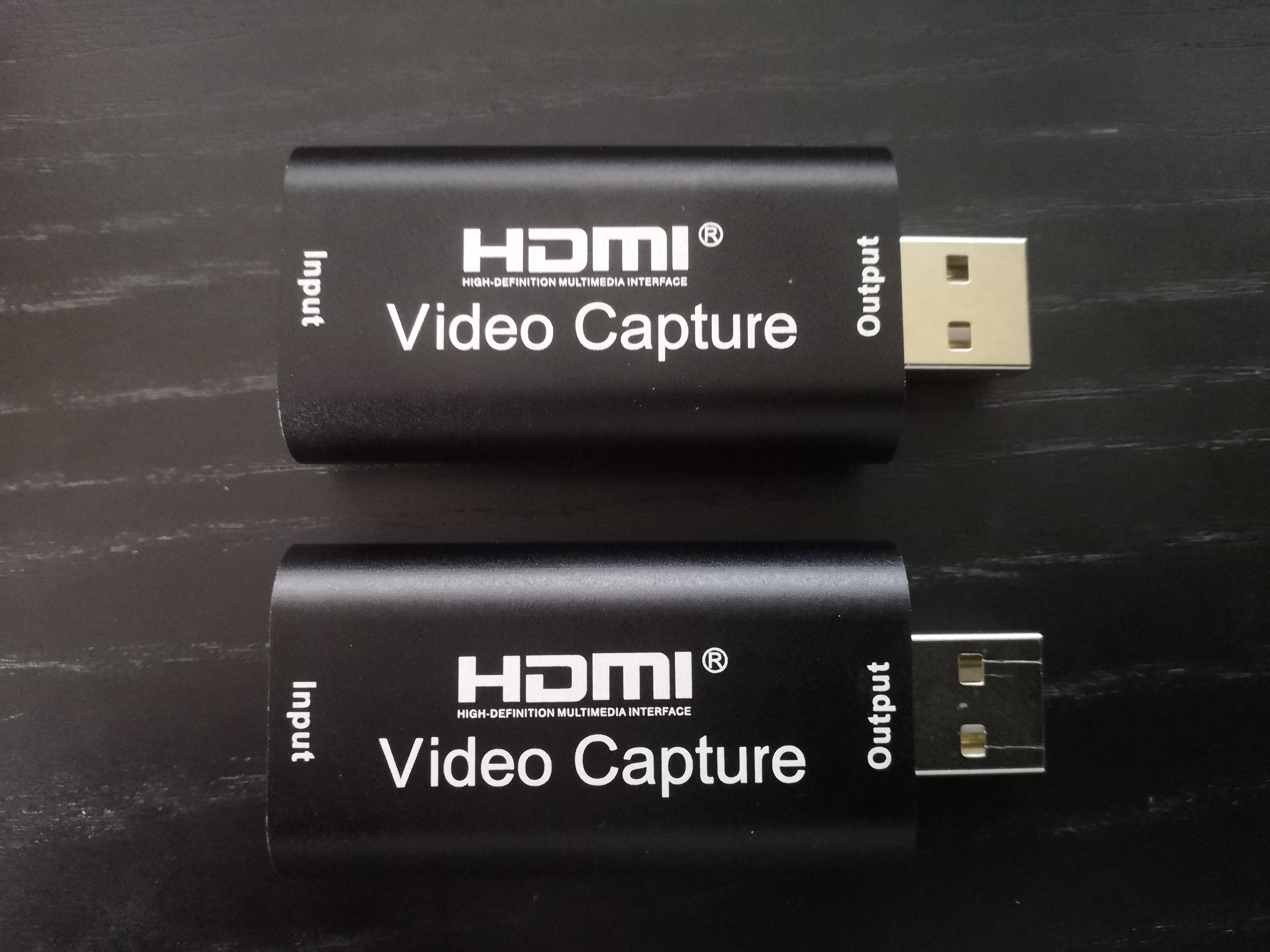 ...so I thought. However it looks like a chinese factory has produced a batch of really cheap HDMI > USB Video capture devices that work at upto 1080p/60. I was very skeptical, however after checking out some reviews from a number of equally bewildered people I decided to get a couple...one from a UK reseller, and one direct from China. Both combined cost £25 (£20 from the UK, and £5 from China, with a 2-week delivery). Prior to this device coming along you'd typically be looking at £80-£150 for a HDMI capture device.

Turns out they work! I've tested them with a couple of GoPros (A Hero 3 Silver and a Hero 7 Black...both output a clean HDMI signal over 1080p), not yet linked up laptops, but the process would be identical (connect, output HDMI, and then select the USB Video input in OBS and configure). They are also pretty low lag (so long as you turn off buffering, and any camera settings that might slow down the output like image stabilisation). It's effectively an Elgato Cam Link (it doesn't support 4K, but then most camera do not output a clean HDMI signal at 4K either), so you can cheerfully use support list to see if you can turn any old camera lying around into a decent webcam... The audo does not seem to come through, but that's not really an issue unless you don't have any other microphone/headset.

I was genuinely surprised they work, and was expecting to either brick the camera (my Hero 3 Silver was the sacrifical lamb), or get a downgraded/non-existent video output. They obviously only do pass-through (so if the lag was an issue, you might want a HDMI-splitter to have an instant signal, and a slightly delayed one for capture). As far as I can see both devices from the suppliers are identical...they are all over Amazon at the moment, and if you could do with a HDMI > USB device, definitely worth picking one up before they vanish (or, more lightly, someone buys the supply and re-brands it to a £50 device). 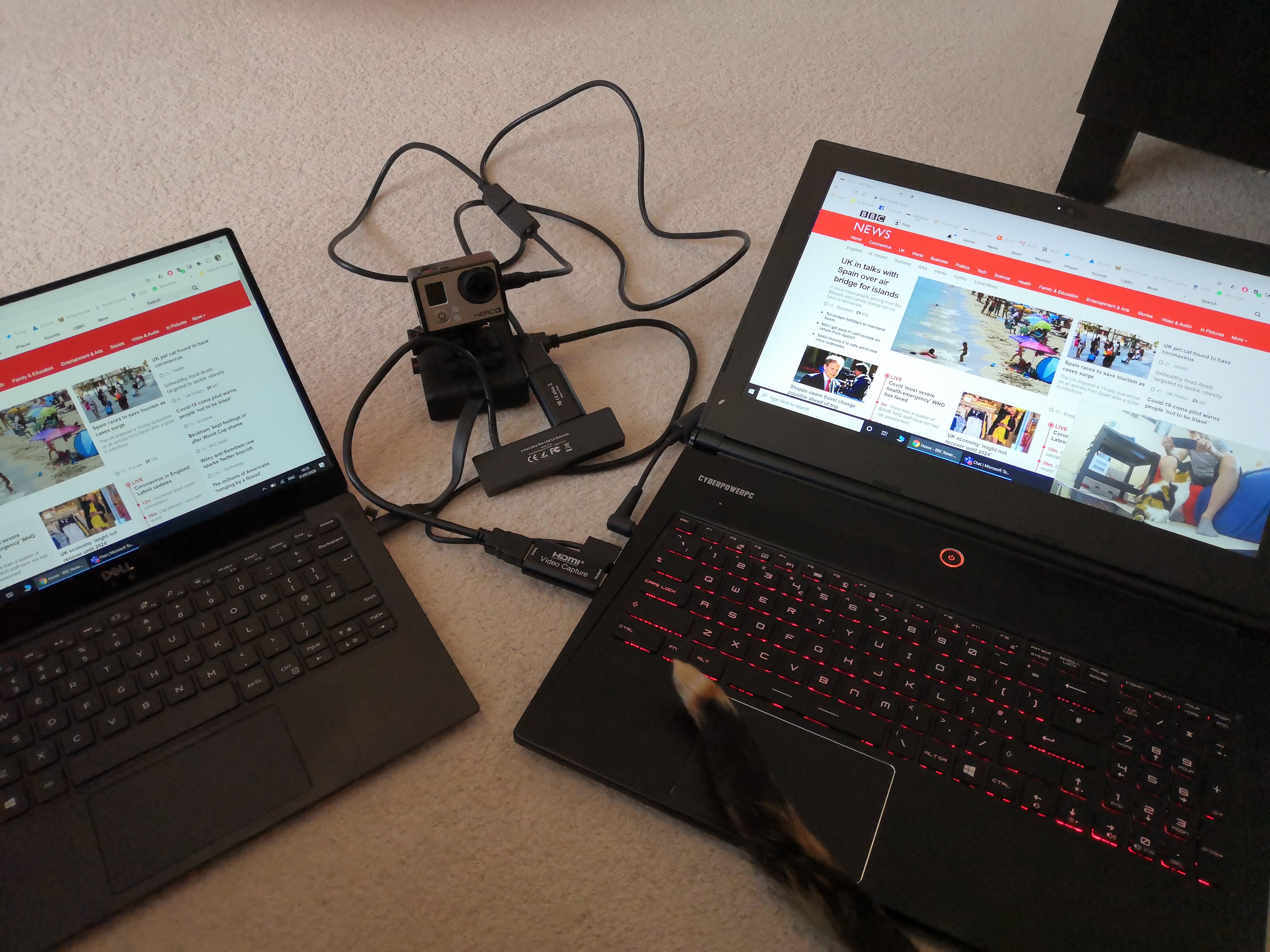 A quick test of using them PC > PC is a success. It's not a pretty test, but this is my daily driver (Dell XPS) and a camera (GoPro Hero3+ Silver) feeding into OBS on a separate laptop (Cyberpower Fang Edge). It didn't like 2 of the HDMI adaptors feeding into a single USB hub (and they are too fat to both fit into the Fang side-by-side), but otherwise it's fine.

The XPS has a better processor, but the Fang has an onboard GPU with NVENC support, so it's better placed to handle video encoding.

This is delightfully nerdy! Love it!

Weirdly, I've recieved a third one today (from China). So I now have 3 HDMI input devices, which is quite possibly 2 more than I need...