This evening was all about booleans, kitbashing and sculpting.

The workflow I used for booleans in Lightwave was to generate as much geometry as possible and then boolean them together to ensure that the mesh looked clean when it was rendered. If you wanted to make any changes later, it usually mean keeping all the intermediate steps and then re-performing the steps you took after the edit. I knew it wasn't wise and the more complex a shape I got, the worse the render would be. That's why I moved over to subdivision modeling. The downside of that is that many of the models look a bit too blobby and I had no idea how to fix them.

In Blender, booleans are a first class citizen. Rather than create all the geometry as you go, it remembers the booleans that you want to do and in what order and you can mess with the different shapes without ever baking the polys. You then add more modifiers for smoothing and you've got yourself a nice way to build up fiddly bits.

Kitbashing is the name they give to building up a library of parts that you can draw from; making models much quicker. I did this with Icar, I had standard seats, airlocks, gun handles and so on. It's nice to have a term for it and Blender has some neat ways of moving objects or parts of objects between blender files. There is quite an emphasis on this method of building in this course, so I am going to really build a big library when I start on Icar bits.

With a bit of booleaning and kitbashing (the nuts and bolts), I made this little doohicky. 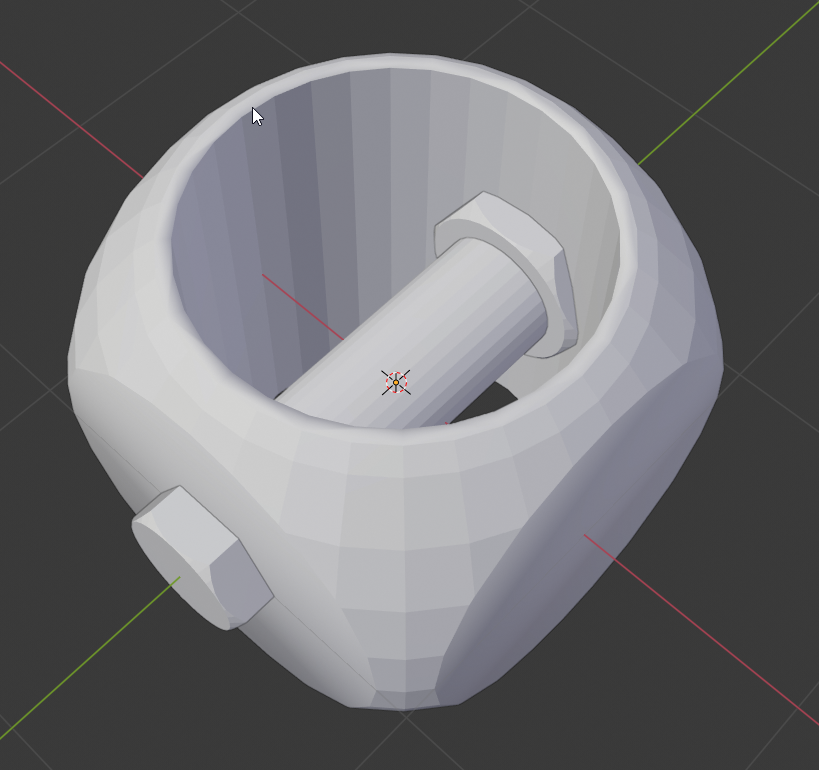 I spent most of the evening playing with this; it's a lot of fun, especially for prototyping. There's a workflow for building up your sculptures and then drawing points over the top but I didn't bother with that particularly this time around as it's not a focus for this course.

This became a head only while I was experimenting. 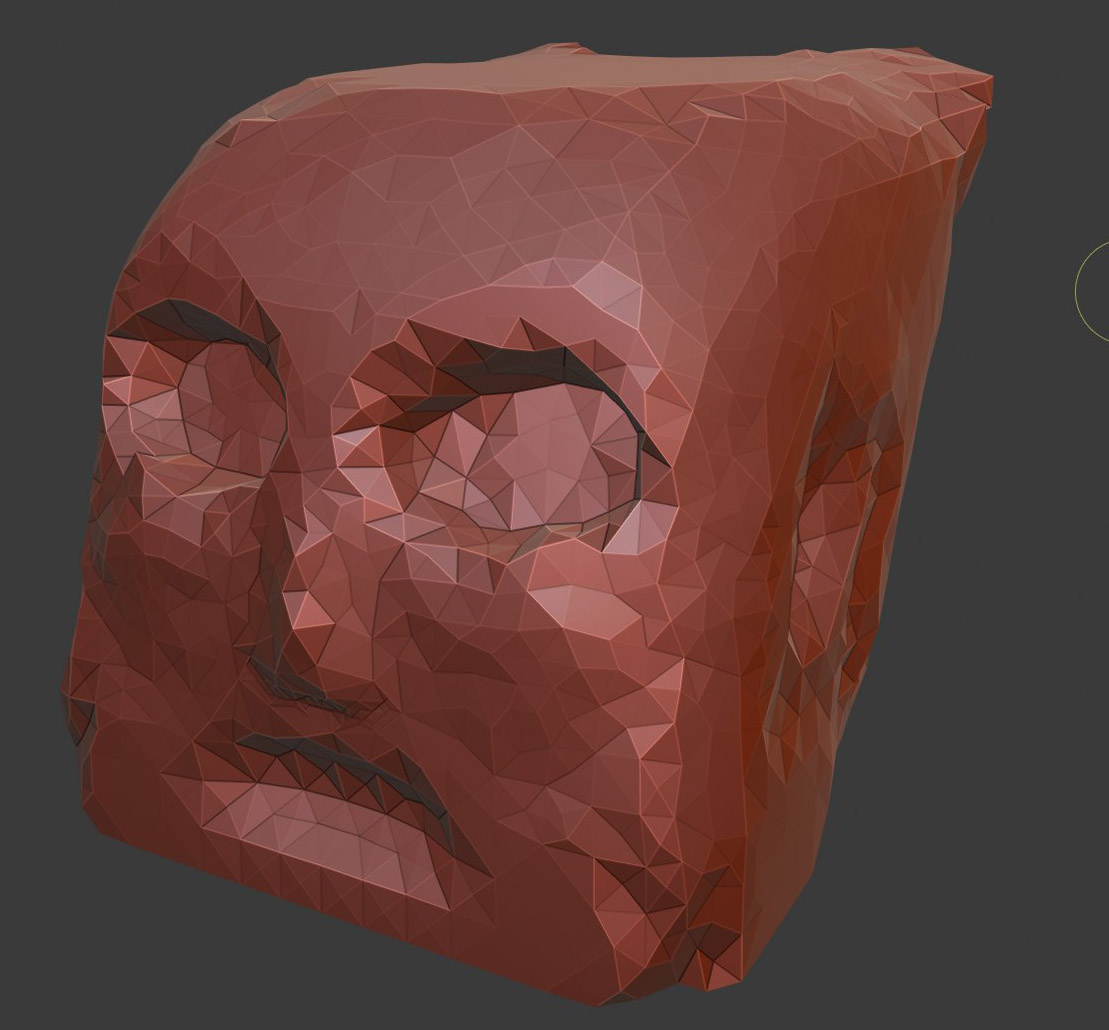 I spent a little longer on this one: an Icar-esque car. 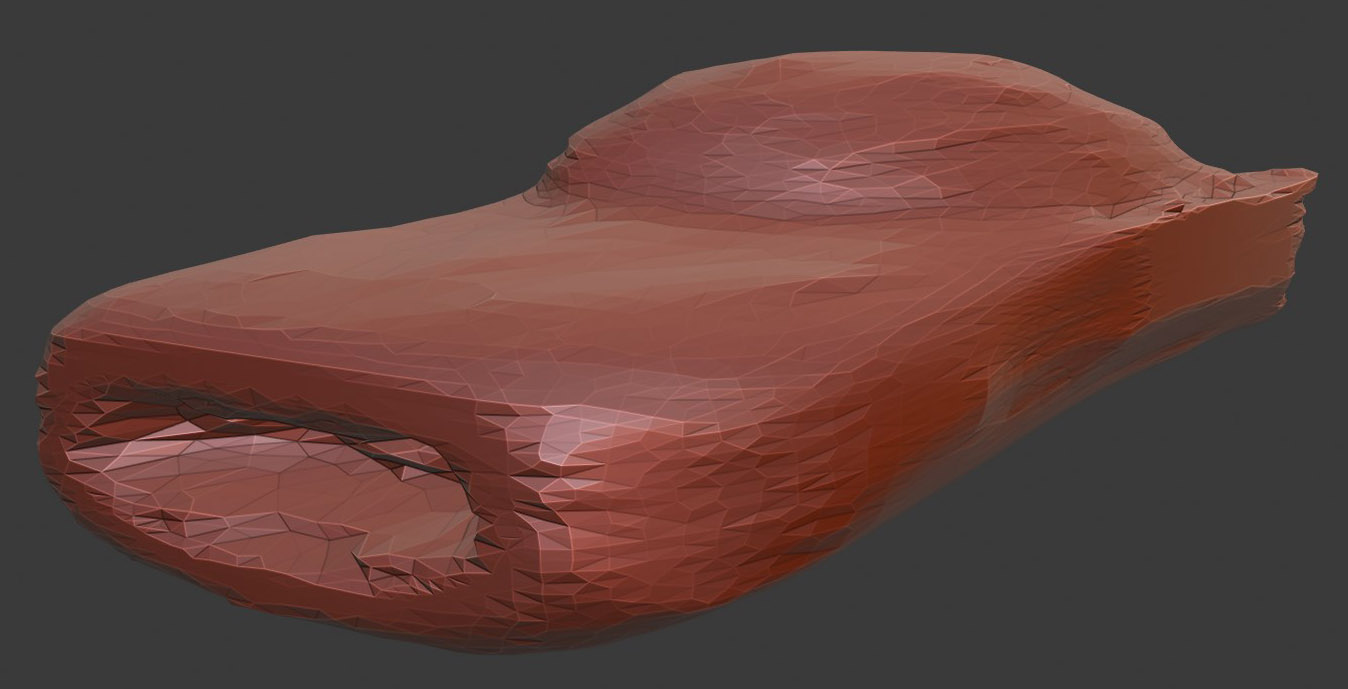 I went a lot quicker this evening, with my cheat-sheet to hand. Looking forward to the next time I get to sit and move through more of the course!

you can increase the crease on a given edge (shift e I think or there is a setting in the point transform menu 'n' under mean crease) as you increase the crease the edge will turn pink and you will see the shape pull into that edge tighten. This works fairly well but for some corner points it can lead to weirdness 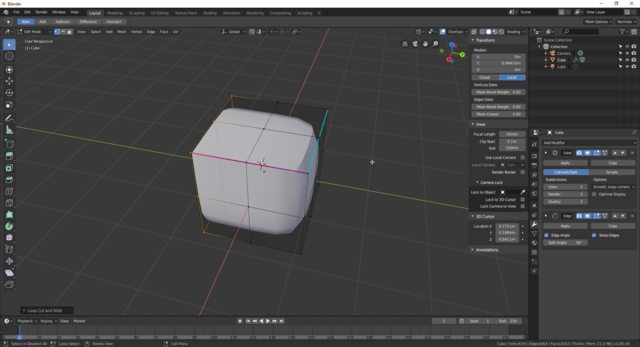 Adding extra edge loops or bevels to the geometry and then sliding them close to the edge you want sharp. This works in almost all situations without too much weirdness but increases the geometry and can cause problems later especially if you want to change thing later as this is part of your model and if you slide the extra edges right down tricky to select and remove with edge dissolve or some such. It does give you the greatest degree of control on how the edges are 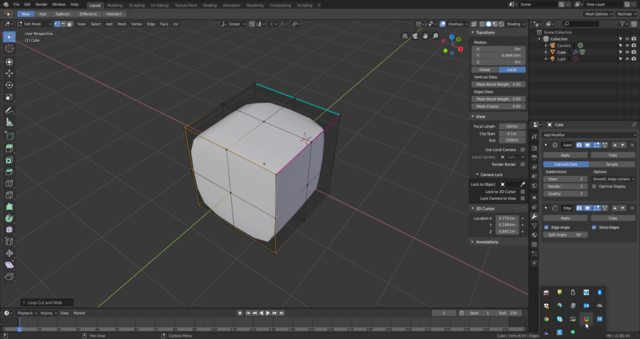 Adding an Edge split modifier, you can either just add this and set an angle at which to create a hard edge or you can mark edges as "Sharp" with ctrl+e mark sharp this will colour edges blue and then if you have the edge split on sharp option enabled it will give you a edge split (ie as if there are two unjoined polygons meeting at that point with the seperate edges and normals). This method is like the crease and can cause weird effect it also tends not to pull the edges as tightly together as the other two methods leaving some roundness to the shapes 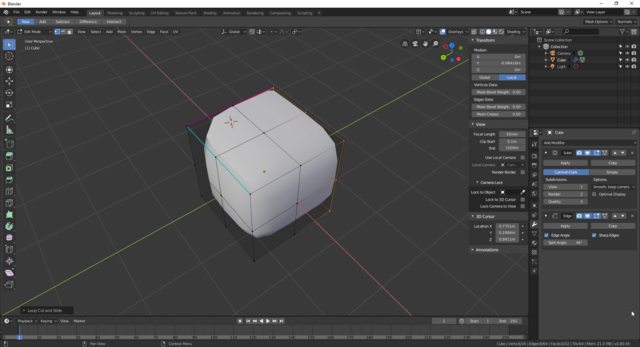 As a quick sculpting tip a good option to enable is Dynotopo (or dynamic topology) in the tools panel it will then adjust the number of verticies to the detail level you require automatically as you sculpt adding in or taking away verticies to match the detail level. Depending on the mode it adjusts this differently but typically the view distance in the display combined with the detail size setting is used to determine the amount of subdivision so zoom in close very fine details zoom out much less subdivision. This allows you to have a variable amount of detail on your sculpts without having to have globally huge number of vertices. It makes the sculpting less demanding on your machine and can make the process of doing re topology (taking a sculpt and turning it into a workable model) easier later. So for the car modely you have there you are using huge number of vertices for not much in the way of detail which for starting is fine but as you add little details will quickly become unmanageable slowing things right down and or crashing your machine as it runs out of memory and processing power.

In this example you can see it at work I've got a cube and something like three different levels of detail on the same surface. If I was going to my smallest level of detail in the middle over the whole cube it would be millions of vertices over the whole object as it is the detail is confined just to the areas that need it reducing the total number of vertices to something more manageable 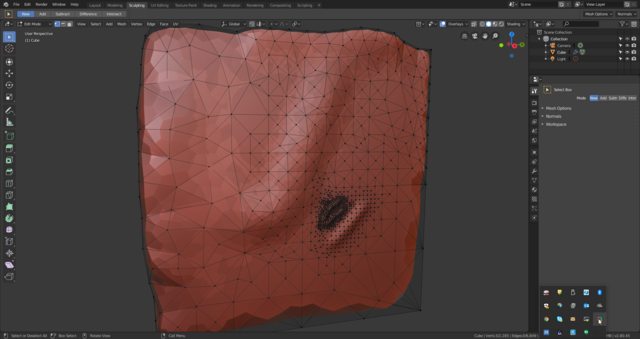 Excellent tips, thanks for taking the time, EMW! You've raised some fair gotchas.

I'm sticking to the course order - which has Sub D coming up - so that I can feel like I'm making progress by ticking off the videos! Thanks for these gotchas; I'm looking forward to Sub-D because I know controlling that is where hard-surfaces are made or lost. The modifier workflow is a bit of a brain-ache but I'm getting used to it now; it does make sense and I do like it, it's just different!

To get the next version of Icar out, I'm only going to re-render those bits I need to replace, everything else will just get copied across as is. Then I can go through each model and replace as I get better with Blender. I have a sense that even in a few months I'll be a better modeler in Blender than I will ever be in Lightwave by just experimenting.

The course doesn't go into sculpting much, so I'll come back to that in the future for prototyping new stuff. I was using dyntopo and will need to play with the zooming in and out and changing the level of detail. It did explain retopo using a feature where the vertex can snap to a surface, so you just draw new vertices onto an outline, make an ngon and split into quads. Nothing too mental there; I did the same in LW when using drawing background images!

I'm not sure why but these modeling types frown on the ngons it could be down to maintaining proper edge loops for animation purposes as ngons go weird if move them. Although sorting out the edge loops and polys is all part of the "fun" of retopo spending hours rejigging vertices and edges to try and make them all quads or triangles having to put in then take out again more loops and points because something doesn't quite line up and then moving that disrupts some other part of the mesh. Good times

I know hard surface is tricky in sculpt it's very very difficult to get the surfaces how you want them it tends to be you sculpt something close to what you want reptopo that then with the smaller number of points for things to go sideways on you try and hammer things into place. There are some really talented people that have mastered how to make things like robots and such with sculpting like this guy.

I've toyed with it and it's a lot of work to get good results seems like the more mesh based modeling techniques are a bit easier for the beginner. It is a lot of fun like playing with clay :D