Mucking about with Marching Cubes

There are newer possibly better algorithms for doing the same thing but marching cubes is the simplest. I've wanted to try it out for a while but have never gotten round to working out how to implement it. The basic idea is based on a set density you define as "solid" you test the 8 corners of a cube to see if those points are solid or not then there are a set of 16 different mesh types you can generate based on that.

Today I saw a youtube video by Sebastiian Lague in his unity based coding adventures series ( see here https://www.youtube.com/watch?v=M3iI2l0ltbE) on how to implement the algorithm in unity using lots of clever stuff.
I thought I'd have a go at doing it using Godot and over my lunch break I knocked a quick prototype together

Works fairly well if a little hardcoded and just makes a voxel space some 20x20x20 the a quick bit of opensimplex noise to give the density and away it goes. Some odd things like the collision generations seems to have a gap there you can slip through but not bad for a first bash.

Very very quick and dirty, would be better if I increased and decreased existing density values in the area selected rather than punch out a sphere where the raycast hits

Added a simple deformation option that adds or subtracts from or to the existing density. My astroneer clone is almost done :D

That is super sexy, EMW. Love it.

just uses the godot logo as a test texture

Heres a shot of the fragment shader it just blends each of the planes (xy,yz,xz) depending on the surface normal. 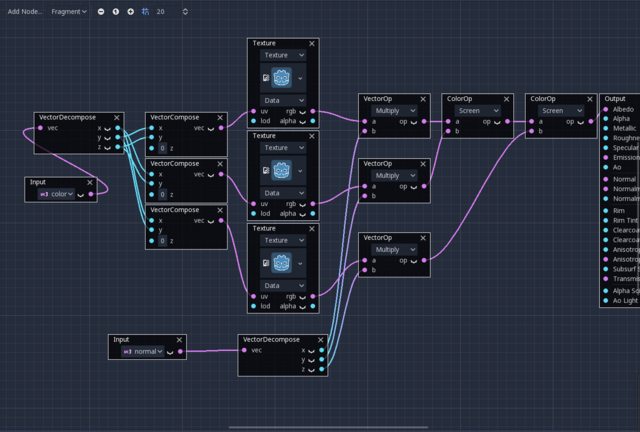