Gill got me the Lego Technic Rough Terrain Crane for my birthday, and this weekend I sat down and missioned my way through building it.

Despite having grown up playing with Lego, I've never actually built a Technic kit from scratch...being the yougest of threee boys, I always had hand-me-down Lego...a large box of the stuff, and if I was lucky maybe an intruction booklet from an ancient kit, though no assurance the parts were in the vault of bits. This, then, was a bit of a new experience for me, and I was both excited, and a bit apprehensive...after all, this is the largest Technic kit ever produced, with over 4,000 pieces. I'd read a couple of reviews, and downloaded the PDF booklets so that I could free up some build-space on my desk. Most reviews suggested this was a 3-4 day build! The instruction books (there are 2 of them as the thing has over 1,400 steps to go through, and they couldn't bind it into one volume) had a good chunk of weight to them by themselves.

Despite my apprehension, the build went remarkably smoothly, and I finished in a little under 2 days...admittedly they were full days (I would say about 14 hours in total). The kit is very well thought out, and there are a number of feaetures of the design that made it much easier to build than I expected.

1) The build is broken into 13 parts, each forming a chunk or function of the final vehicle. Each build-part has it's own bag of parts, so you were never hunting through all 4,000+ parts for a single small vital piece. Each build-part is about an hour or so of work, so you could take breaks at regular points. I went through it in a fairly organised way, getting all the parts out for each step, then working through it and double-checking visually against the final picture on each page. I made a couple of mistakes, but picked them up before I moved onto the next step every time.

2) The instructions are superb...I definitely don't remember them being this good when I was younger. There were a number of points, especially towards the end, where I found myself going "ooh, thats clever". The way different chunks joined together, gears were used to power different areas, and small parts were used to build up complex structures. There was one specific bit where I was putting together a small arm, wondering what it was for, only to flip over the page and find out it was to tidy away the spare wire between the motor and the battery box...which leads me to...

3) The entire thing is powered by one motor. That sounds underwhelming until you find out that the motor powers the winch, boom arm angle, boom arm length, platform rotation and raising/lowering the stabilising feet. To do that it has a number of interconnected gearboxes and power distribution units, all with neat levers and knobs around the vehicle to change the function of the motor. I initially thought "well, thats a very compelx cost-saving exercise", but I watched an interivew with the chief designer, and he wanted to make sure the platform could free-rotate, which meant putting the battery boxes on the platform, not the main body (or the wires would wrap around the axis)...that in turn meant weight reduction or the platform would be too heavy. There are 3 distribution points...one selects between either upper or lower functionality...then the upper distribution is a 6-position lever to operate the winch, boom arm elevation and boom arm length, while the lower power controls the stabilising feet and platform rotation.

4) There are some nice, subtle quality-of-life designs within the build that quietly make everything really easy. One I noticed early on was the use of colour in the initial phases. The main body looks pretty similar front and back...so at one end they had used some large green parts, and on the other end some identical parts, but in bright orange. This meant that you always worked on the right half of the build at the right time. Axles alternate in colour get longer (so a 4-length axle is red, a 5-axle is light grey, a 6 axle is black etc etc). This makes part-picking much easier. They also give a 1:1 size picture of any bit where you may get the wrong length...I quickly got in the habit of double-checking the part I'd picked against the screen in front of me to ensure it was right.

5) There are a tonne of really nice details...from the 4-wheel steering (with full differential gearing on all wheels) is controlled by a wheel at the back, which just happens to also be perfect for pushing it, through to the hinged access panels at the back to let you get to the battery pack easily if you need to swap the batteries. The drivers seat has an adjustable back, there is a toolkit in a side door, and the engine cylinders move as you push it. Right towards the end I was going through a small step with 5 pieces thinking "what the hell is this even for", only to suddenly find I'd made a fire extinguisher for the cabin.

It's now sitting on my desk, and I should probably find it a proper home. There is no way I'm taking it apart (not even sure I could, short of doing the instructions in reverse...some of the ways it all clips together really are very effective. It's huge...the above photo is about as small as it gets, the boom arm extends to double that length, and can angle upto about 70'.

If you have a spare weekend, a large desk, and some spare cash its a lovely project to plough through...when I was building the boom arm and fitted it to the motor for the first time, I probably wasted a good 10-15 minutes just extending and retracting it while grinning like a loon.

The instructions are superb...I definitely don't remember them being this good when I was younger

The entire thing is powered by one motor. That sounds underwhelming until you find out that the motor powers the winch, boom arm angle, boom arm length, platform rotation and raising/lowering the stabilising feet.

That is super impressive. The justification makes complete sense. Furbies are also one motor... not that I've skinned one.

I probably wasted a good 10-15 minutes just extending and retracting it while grinning like a loon.

That's not a waste.

Can you motorise it further? Quite often there are instructions from semi-pro builders on how to make these things radio (bluetooth) controlled. What does Lily think of it?

It's too big for Lily to register as a thing. She was interested in the bowl of parts, but the completed model is furniture size as far as she is concerned.

I've not looked into modifications...however I suspect the 1-motor design limits it's remote control potential, as you need to get hands on to switch the power distribution, or start bolting on multiple motors to power each function individually. There is an example here of a rull RC model, and build instructions are here, but even I can spot multiple motors in there, replacing most of the clever power distribution gearing (I can see motor connectors down by the ladders on the main body...that's where the main gearing system is, the only motor in the model is at the back of the upper body). Ironically, that model is probably less complex than the official build, and significantly more expensive (which is hard work!)

//edited - there are 9 additional motors in that build.

I've been building a few lego kits myself (did this transforming overwatch bastion model at the weekend) and I've also been finding the improvement of instructions and setup to be superior to my dimly remembered childhood memories. I think partly that's because as a kid I always tended to get generic kits with multiple models rather than a single model which could be bagged up appropriately but even then things like the 1:1 scale images in the plans and careful colour coding make even complicated builds easy. I am in awe of the design of these things the Apollo 11 model I did was especially interesting the way they used parts I'd never had thought of using in clever ways to make the thing for one cylindrical and very robust was amazing.

I'd love to do more lego there is something satisfying in the way the final model appears out of the parts one chunk at a time the cost of the things holds me back somewhat as it's gotten pretty damned expensive for any of the more elaborate kits.

Here's an obligatory timelapse of the weekends build

Cool, EMW. I like that you're getting the full "kid experience" by building it on the floor!*

I did try a timelapse on day 1, but it was terrible as my table is black, and it really screwed up the white-balance of the camera.

Day 2 I live-steamed to nobody, and stuck a big sheet of foamboard on my table to sort out the brightness/balance. By this point it was hard to get the entire thing in shot.

Didn't know about the livestream until after; I could have put you on a monitor while Felix and I played Astroneer. Would like to see it if you ever do another; please do advertise a little more! :)

LOL, in that video, you look like a child in comparison. I know you're about the same size as me (but fitter, naturally) but you look tiny in comparison! :)

Didn't know about the livestream until after; I could have put you on a monitor while Felix and I played Astroneer. Would like to see it if you ever do another; please do advertise a little more! :)

It was very last minute...I looked at the timelapse from the day before and realised it was bob, and then quickly fired up OBS as an alternate capture (which has way more tools than the default camera app with regard to colour control...also I found have the instructions as a sub-window). You know the world has changed when it is easier to live-broadcast something than it is to locally video it.

To do it "properly" I'd probably want a second camera for close-up build, and put the high camera more directly overhead, and a bit further away (probably a selfie stick or tripod mounted to the shelves behind my desk, rather than on top of the monitor). I had completely underestimated the size of the thing, and was running out of space towards the end when I was mainly working on the main model.

Very nice!
I too might have recently built a little LEGO Technic buggy (over Christmas) ... no time lapse though :( 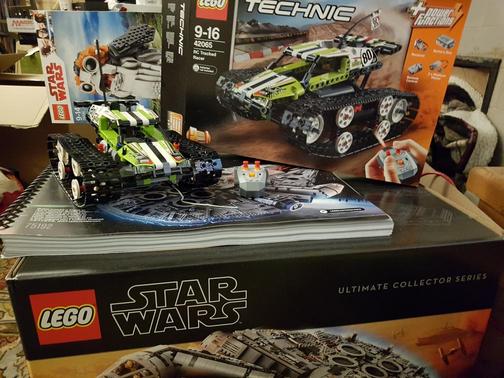 I don't really have any tables* at least not of suitable size so floor works best
*table tops in america are of course carpeted what do you think this is the dark ages :P

WAIT A FUCKING MINUTE, BIG FUCKER. I YOU CAN'T NONCHALANTLY PUT THE BUGGY ON TOP OF THE UCS FALCON, KNOB-BAG!