Pete is getting married to the wonderful Gill tomorrow.

Since we met back in 97, Pete has been the benchmark for dependable self-sufficiency. Relying on no-one and competing with everyone (most of all himself), he has consistently used guile and wit to forge his own path. He remains an inspiration, driving rationally and stoically through the worst luck without giving up or surrendering. Adopt, adapt and improve incarnate.

I've searched through my photos to find a quintessentially Pete moment and I've chosen this from 10 years ago: not just hitting the swing ball but brutalising the bastard while his wife-to-be ducks for cover. 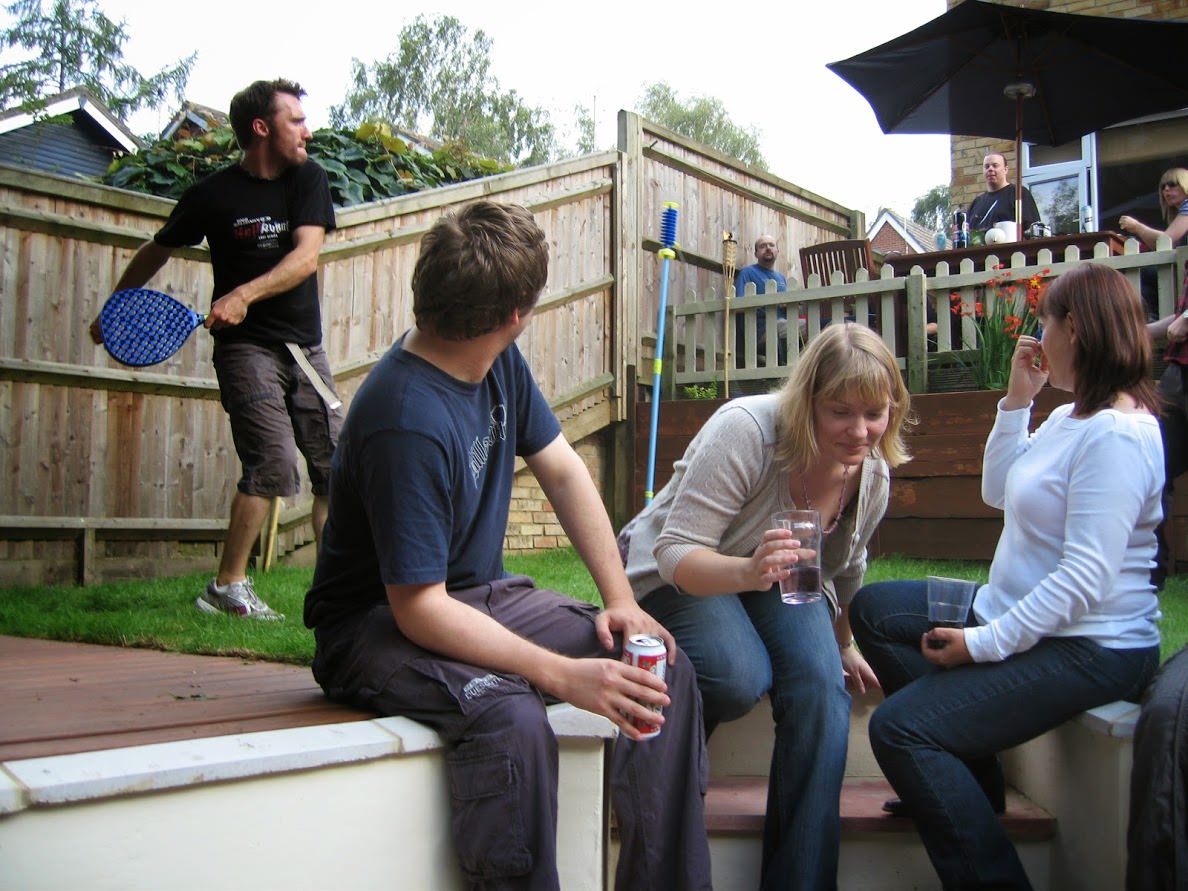 Through everything, he's remained my friend - even if I have not always met his understandably high standard and for that, I am absolutely grateful.

Just out of shot is the 3 year old I was playing against. Kicked her arse.

Many thanks. Tomorrow will probably be one of the most terrifying things I've ever done. I've never moved this much cake from one place to another...literally anything could go wrong.

For those unable to attend, here's a brief retrospective....

Nestled in the beautiful village of Hurley on Thames, a beautifully converted barn had a church-like vault. Pete was dressed in brown DMs, blue tweed and mustard jeans, like a scruffy country gent who'd got lost on his way to Henley Regatta. He seemed less nervous than the gentle-soul best man, Harry.

I met Byrn, Jen and Stamp before settling in amongst a clutch of wiry cyclists. Skunty and Lucy behind and eventually Nibbles. Gill was punctual, preceded by two sweet little bridesmaids in white (her nieces) and her sister in royal blue. Beaming and beautiful from crown to toe, the procession was only just long enough to take it all in. The civil-like ceremony was personal, with self-authored vows. It felt like we were looking onto a special moment crafted for themselves; a great privilege. That sounds obvious but weddings can become a performance for the congregation, which this was not.

Standard tropes followed; chucking rose-confetti (above, not at), pictures, happy couple disappearing off to take it all in and jolly conversation in a cloistered garden. The Wedding breakfast was slick; three courses with dietary requirements set. We were missing Kate (sadly, childcare) but gained the photographer Katy, who was a good laugh. And a big Metallica fan, which Nibbles "approved" of.

The father of the bride (Ian) kept himself together during an emotional speech. It's been a hard summer; he's not fucking wrong. It was a good time to pause and remember what they'd been through. Harry was up next and although Nibbles and I fed him some choice bits, he performed the speech from the heart and in his own style. Pete said he got off lightly but I don't think so, both were excellent and fair speeches that played bang on to the audience.

There was a moment where Ian (father of the bride) said that the wedding was "about bloody time". It was said with humour and perhaps fulfilling a cliche but I felt that it suggested that not initiating the marriage was a sign of a lack of commitment or dithering. Pete? Lacking commitment or dithering? Marriage here was for respect for love and the other's wishes; not through pressure or for some arbitrary social norm. The fact was that Pete made that same promise many years ago and it ran deep to the marrow since. I doubt anyone else noticed.

No speech from Pete. Isn't needed and not his style. Stuck true to self and laughed it off. Good man.

I should mention cakes. Although the cake stand was poised with a collection, it never seemed to empty. Delicious stuff. Pete at his best. Loved it. Could have many more!

After some pottering around, peeps filed in for the evening do, which began with a quiz. Mirth filled with facts about the happy couple (who couldn't remember the facts they'd supplied) and with a break for chunky butties, it was unexpectedly good fun. Our team came joint second-from-bottom.

I'll finish with the first dance as I had to head back to the mothership. Only a few of us recognised Bad Touch by Bloodhound gang. For me, it was the cherry on the top, the final statement that "This is who we are".

A great day enjoyed by all, a deeply personal and individual event that felt like the Gill and Pete and to pull that off under the huge weight of social expectation was supreme. And Gill looked gorgeous; but then you knew that.

The day went really well, and while I was very nervous, and sort of dreading the entire "centre of attention" thing, it was really enjoyable.

I've had a fair bit of light-hearted stick around the "finally" length of our relationship prior to the wedding, completely un-bothered, and I can understand where it's coming from. For me, the 2 key parts of the wedding were;
1) A confirmation to Gill that, despite my complete inability to show emotions, I do love her, and she's the world to me
2) A thank you to friends, who have been my support network in the absence of a family for the last 30+ years.

I also took the chance to change my name...I've been threatening it for years, and there was no way I would inflict my "family" name on Gill...as such it made sense to take hers instead. As it's not the norm I've done a deed poll, and used that to also change my legal first name to Pete (which is pretty mch what everyone already refers to me as), and completely drop my middle name. It will take a bit of getting used to, but I'm far happier with that than Gill having to be burdened with my old name. When I get back I have all the joy of changing all my formal documentation, as is recommended, I've travelled using my old name.

We on purposely kept the ceremony fairly short...partly as they can really drag on (especially if you add in bells and whistles like readings), and partly as we doubted we could keep straight faces in the midst of such seriousness. The vows were not personalised, they were the shortest option from the 3 defaults Windsor and Maidenhead Registry office put on their forms...we did discuss writing our own vows, but it quickly degenerated into a arms race over who could wangle the promise of most cups of tea out of the other. In lieu of reading quotes/poems I had my favourite music before and after the ceremony (squeeing stuff like Faith No More, the Levellers and Murderdolls in before, a metal cover of "Genie in a Bottle" and Wonderstuff during the signing, and the exit music was a very quiet "Word Up" by Gun).

The quiz we came up with to shorten the traditional disco (we were never going to agree on evening music, and we decided everyone liked a pub quiz...and it also gives people time to catch up and chat). It was quite embarrassing when I forgot how many bones I'd broken. We wanted a relaxing, enjoyable and stress-free evening for everyone, and hopefully we covered most bases...we certainly had plenty of time to wonder round the tables, catch up with people and enjoy ourselves. I was pretty shattered once the first dance was done (again, we were never going to agree on a "smoochy" song, so decided instead to go with something completely inappropriate...so much so that the DJ actively questioned our choice/sanity), and retreated to the courtyard where we were able to talk and say goodbye to people as they slowly drifted off.

It was amazing to have so many people we knew there with us, and the venue (both the building and the staff) were great...they made the entire thing very stess-free. Our personal on-the-day support staff (Harry for me, and Gill's family) had very little to do logistically, with the venue mainly telling them to have a drink and relax. The food was good (the treacle sponge definitely didn't have salted caramel when we did the tasting...and probably shouldn't have, as it was too sweet), and I was really happy with how the cakes and the favours turned out (including handing out the quiz prizes, went through 8kg of fudge...then there were 160 cupcakes, the topcake and the macarons). The photographer (Katy) had not met me before, and Gill had warned her that I was not exactly comfortable in front of the camera...she dealt with me very well, and when it came to the formals and the posed photos she made it pretty fast and relaxed. I should also say that the suit rental chaps at Moss Bros did great work...I wondered in there and asked for something "formal, but that doesn't make me feel like I've been dressed up", and the end result was not too bad (even if I do cringe at photos of myself). Gill, obviously, looked stunning, and still find it quite surreal that her light-up shoes got a round of applause as we started our exit.

Finally...fuck me we lucked out with the weather! Storm Callum the day before, and torrential downfalls the day after...yet we had 25'C and dry in mid-October, which meant we could use the venue to it's full extent. The weather luck has continued, and I'm currently on the deck of our villa in the Maldives in 28'C, whereas last week they were still in wet season, with regular thunderstorms. For the most part, 2018 can go fuck itself, but I respect it's decision for a cease-fire in the last week.