With Naomi being a bit less of a bellend and Felix settled into a pattern, it's time for a more solid plan.

Front and centre, let's put it on the table. 2017 has been a stressful year. Not really anything to do with Naomi, who is a much more chilled out baby than Felix. I can hear the loud tick tock of life running out. I've always said that I packed more into my first 30 years than most manage in a lifetime and that once my gallivanting about came to an end, I would concentrate on being the best Dad that I could be. Certainly not mistake free but to a level that I could be proud of. However, that's not really enough for me. I need to be doing more. I can't just look back on the first 30 for a life well lived.

I'm driven but I'm driving without a big goal. That's causing grief because my brain amplifies all the jobs around the house that need doing. I can't sit on my hands and relax. I have to fill the time with a big goal to sink my energy into piecemeal. If I don't then doing the little jobs (chores/cleaning/DIY/etc) become the goal rather than life overhead (which is what they are) and then that feels like I am wasting my life. Becoming an author, writing RPGs, writing computer games, flying drones: these are hobbies; not a life goal. A life goal might encompass those things.

I'm getting quite bored of the kind of software development that I've been doing. I seem to spend my life reworking domain models to fix poorly thought out business decisions or rushed code. I also find in every job (except my very first) that the business imperative comes at the expense of the technology and that tech people will just "figure it out", magically pulling something out of the hat at the last moment. That's happened twice to me this year, the last being in the run up to Christmas where they'd even sent the invoice without knowing how long it would take. I've warned them up front that this kind of shit will make me jump ship and that, as their only developer, paying me just below market rates was foolhardy. As soon as they can, they will pay me more. I know this because they know that it's foolhardy. I do think a pay rise is in the offing but I'm not sure that's going to change the job per se.

The bigger problem is where to jump to. I could walk into another lead web role, build a team, learn the domain, architect the whole thing, get the business language and logic sorted out and run the show but I would soon hit the same thing: fucking sales people inventing bullshit, believing their own bullshit and then selling bullshit only to be then told that huge shortcuts would need to be made, shortcuts that impact the productivity and profitability of the software but ultimately don't hit the pay packet of the salesperson. That's not really the case at MCO but it has been elsewhere. I also quite like the domain of MCO. We're helping people. Real people. People like my Mum.

So I've started considering doing other things. nvidia have various jobs in doing AI on GPUs based out of Green Park (I used to enjoy the cycle there and can have lunch with Byrn: bonus!) but I am not sure I want to regress back into languages that will bite you as soon as help you. I'm going to convert my algorithms to running in CUDA (on the gfx card). I've read a load of docs already and I think self organising maps, as unsexy as they are, fit the parallel model much better than multi-layered feed-forward networks.

I'm also not sure that modern software development is actually that creative anymore. Most of the work I do seems to be plugging frameworks together. The decisions are taken from you. Sure, you can go outside the framework but it's rare that you need to. I've been enjoying coding my Cloudship game and realised how much better I am at C# than anyone who does Unity 3D tutorials online. I'm not ready to be a game dev, tho.

Goal: Find a therapist to talk about how I set goals for the rest of my life. I've promised Kate I'll do it, so I've started looking.

I would like to start swimming or doing some sort of exercise but I can't set that as a goal.

Serious;
It sounds like you're in for what will probablybe a hard personal journey. While I can never understand how it's impacting you personally (and so any advice I would have is functionally useless), I went through a similar challenge a just over a decade ago, and believe I came out of the other side a stronger person. I'm certain you will as well.

Less serious;
Reckon there is 3kg to lose in the beard alone.

Right, some things have changed; which is good.

It seems that talking to Kate more has done the world of good. When wondering what I should spend my monthly pocket money on, I realised that the thing I'm missing isn't a better job (the problem I have is that I work alone and we're about to fix that), it's not more money, it's not some awesome piece of tech (although I'd like VR, I want room scale and I don't have a room at the moment), it's time. I wanted to buy time. I needed some time to just potter on the things that are for me and only me. With 2 kids, it's hard but that was the thing to solve.

I've managed to find an hour of "me time" every day between 0645 and 0745. Being an annoying morning person, it's perfect! I get to achieve so much before I get to work, which in turn has made me more productive at work. I also go to bed a bit earlier; which is fine. Having life goals such as "become an author, write computer games" etc seem achievable now that I have discovered an extra day each week.

I had a look at coding for nVidia and I'm not sure it's for me. The tooling is terrible and the productivity is poor. I still would like to get my AI into CUDA but it's not a goal I'm really after.

I've wound back on GTA for the moment as the hackers/overpowered was getting ridiculous. We've played some Blackwake, which was... alright... but I'm looking for something else. Minecraft is still giving me much joy. You would have seen my snag list. I'm currently working on a replacement to Eastgate. I have a plan now and it's secret until I've finished. I'm collecting resources and stuff.

The next MC update (aquatic) looks awesome already. We might have to bin a bit of world (there won't be map errors apparently) but an area I've explored but not built on. We want the snacky updates to oceans!

Icar v5 space combat is ready for playtest; which is great. I've done 2/10 Icar blog posts, have half written another. I've not edited my book but will do; I'm reading a book on structure so that I can work out a structure to it before I start. I'm not sure I'm going to make any Let's Play videos.

Flying drones was going great but I've been beset with technical problems. I'll get them sorted but they take time and money. It's my birthday in April and I get to spend a little extra out of the budget; I'll probably build another quad, a small spare so that I'm not stuck for weekly flying. I've not done any technical blogging - mostly because I've not done anything new at work. That's going to change, though, because I'm killing the backlog.

This is worth breaking into another topic because I've been enjoying it immensely. Game coding isn't as hard as I expected. I won't go on about it here as I want to do another dev blog but it's great.

We had a couple of setbacks at the start of the year but we didn't go into the red and now things are under control. We're still set for all out goals this year.

75kg but I am eating better at lunch; so this shouldn't be a problem still.

It's impressive dedication identifying a timeslot that early in the morning...the most I could commit to at that time of day is "conciousness". Thats the time of day I commute, and I can honestly say I rarely remember how I got into the office.

Really? I thought that - of all the people I know - you were the most like me. Not that you sproing out of bed like I do but have that similar drive to get the day started. And you're a heavy sleeper too. Frighteningly heavy. Heavy-like-the-dead-heavy.

I get up early, however I'm not operational for a couple of hours after...mentally or physically. If I'm doing an event that starts at (for example) 9am, I would normally be up at 6am, eaten by 7am, and then begin a slow de-hibernation. My physical/mental sweetpost is about 6pm, though I can shift that round with routine/caffeine.

To give you an idea of physical impact, my power levels cycling are about 15-20% lower in the morning, especially higher-intensity stuff. Over winter my coach likes to prescribe "fasted" training sessions (wake up, start training, no calories allowed for 2 hours), and I will struggle to do above Zone 2 (fully aerobic) power...roughly 230-240 watts for me. A similar session in the evening, when I'm awake, fed and fully conscious and 240 watts is a warm up, and I can hold 300 watts+ for about an hour. I would say that correlates pretty strongly to mental capability as well.

Micro-update! I have the clipper! It's great fun - quick, powerful and with enough guns to make it worthwhile. I have equipped it for combat for now. Probably will leave it that way. 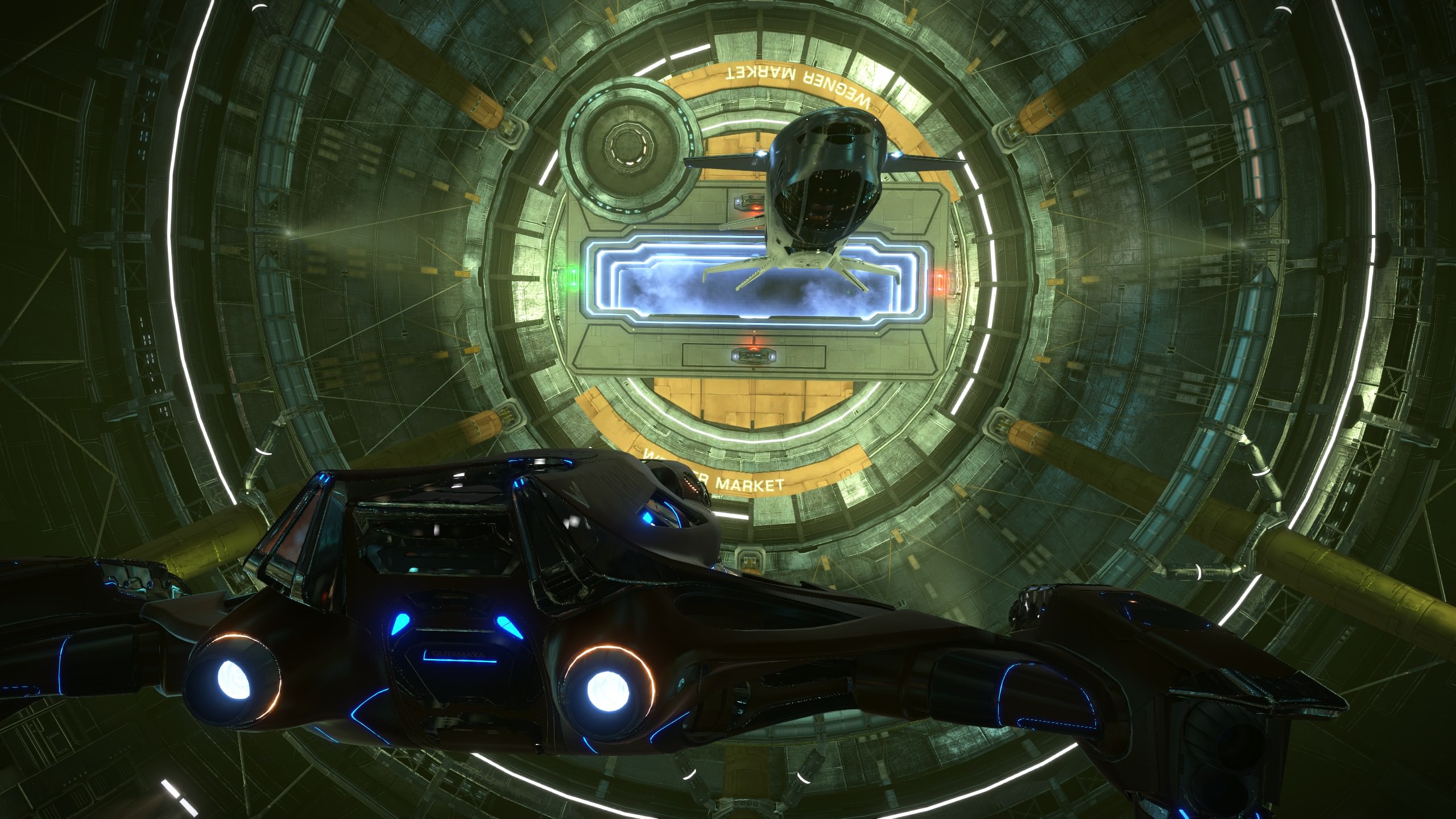 You can't see in that picture, but it's BRIGHT ORANGE. :)

How much time did it take to meet the rep requirement?

Since a recent update, the rank gain was super fast. Also found a couple of systems ideal for it. Can hand over deets if you're keen.

So, that was it. 2018. Hit the financial goals (with some help). Tried and failed (four times) to find a therapist; will keep trying.

Work went sideways mid-year with the redundancy of my boss (which was kind of for the best). They've chosen a person to be some sort of tech strategist on the payroll but I don't know how that affects my role. I appear to be in charge of all the technology, which is fine until something goes wrong.

I was pleased with where I got to with Cloudship, at the neglect of all my other creative endeavours. I hope to pick those up next year.

I need to get out and spend time with people, feeling rubbish through isolation.