MC - The next big project is rail, feedback welcome

I've found it difficult to move around inside Ringwall because there aren't stations where I need them. I'm going to put a new network in but while I am still planning, I thought it might be cool to get your ideas and feedback.

I've updated the rail network diagram to overlay the map.

The Plan - Work In Progress

Should I do a massive circle line?

There is a temptation to make a huge like that joins all the gates and runs in a 800 blocks square and extends beyond the wall. The corners of the tunnel would have stations on them. It would make it easier to go from outside to inside the wall, which is a bit of a problem right now.

Or perhaps I should do a circle that runs inside the wall, joining up Big Rob's tower, creeper hotel and the four gates?

Thinking of colouring the lines too by using coloured clay blocks as a line in the walls so you always know what line you're on. I'll need a fair amount of clay, which will mean some more expeditions!

Wasn't there a mesa biome to the south of where we built the West Horse House?

yes we built a ziggerat on it

I've made a small adjustment to the plan. I think the tunnel from St. Spawncras to Moria is a really good one and I want to keep that. It currently leaves from St. Spawncras from Platform 1 and then goes through a junction, which is sort of the wrong platform and I don't like the junction but the junction will be going with the sky rail, so I don't think it is too bad.

Currently working on a station by North Dam. You can see inside down to Moria, which Gordon and I built before 1.7 and it got moved in. 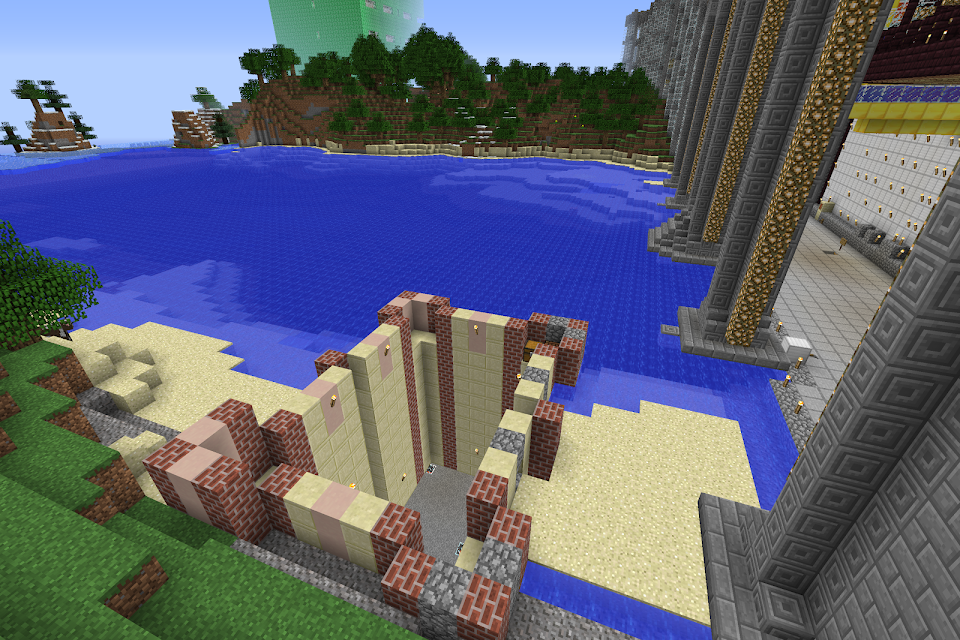 And here it is looking rough and unfinished from the inside. I'll be taking out EMW's secret door to the dam. :) 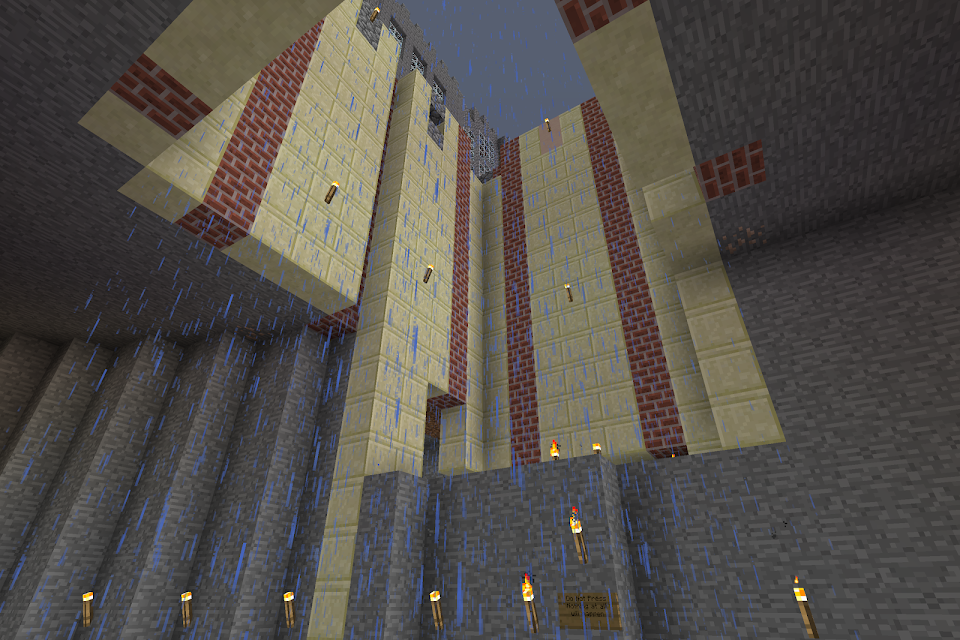 I run out of bloody clay again, so I'll be off on another mapping-based adventure to get some more! :)

What ever you do don't press that button ... nothing at all will happen

The door opened. Not any more though. :)

So long as you didn't find my secret under lake shuttered window ...

LOL! I found that ages and ages ago! There are very places on the server I've not been. :)

Whenever I go resource gathering, I like to build a little house rather than just a cubby hole in a wall. Building a house is a delightful exercise, as I need to make use of materials locally while keeping safe.

I'm currently living in this little cabin on the edge of a lake to pick up clay balls to smelt into bricks (for the railway stations). It's a lovely spot and I've even managed a farm. This one is WNW of 1.8 North Spawn castle by about 200 blocks.

The small scale map I'm carrying I'll leave on the wall inside so that it will appear as a green marker in the Village Town Hall map room.

After the huge complexity of big builds, it's lovely to put a house down and slowly add to it as I mine out new materials.

FYI I've bollocksed the redstone at St. Spawncras for North and West lines (and perhaps) southern lines too!

I've been meaning to have a look at redoing it anyway it's basically acient in terms of the techniques it uses with the additions to the red stone that have happened since we built that would make for much simpler implementation of the same thing.

Ah thanks mate! I've just finished platform 1 - all the existing redstone still works. Have a look at the lines, I've coloured them and everything (I'm short on orange clay, will do another clay run later).

I'm going to start tidying up the platform 2 tracks in the same way. :) Lightstone is the only one I've leaving alone because it's so delightfully unique.

I was widening/digging out/tidying the Blue Line to West Bridge and passed under the steps that lead up to Ringwall and at that point remembered there's no fucking station at West Bridge!!! We never made one. That's my next job, I have enough resources for another brick and sand station. While I'm over there, I'm going to light West Island that the Ringwall Crosses because I'm bored of being mobbed there.

MrE has a super secret spawn bunker that has its own rail line. I'm going to replace the entrance with a SUPER SECRET DOOR and I've blocked the rail line.

I colour coded the inputs and tried to label things so if need be someone other than me can fix things. Though typically when things break it's because water got in and wiped it all away so in that case theres nothing much left.

Superb! Thank you. Platform 1 is working really well, so if you don't wish to upgrade it, that's OK. I think the buttons on Platform 2 are a bit screwy but don't worry about that, Ill fix those last.

Ah, I think we had some wires crossed - I think you fixed Platform 1 and not Platform 2. :) If one someone could put some MASSIVE numbers up above them. :)

Stations! I'm quite please with these two stations. Using brick, sandstone and light blue glass is quite refreshing and gives a light, colourful build.

First we have the station at Northdam - which I keep typing Northdamn, so I'm going to just call it that . The steps inside lead all the way down to Moria. and the station there. Moria is a bit scruffy but I don't head up that way very much at the moment, so it's not a problem. 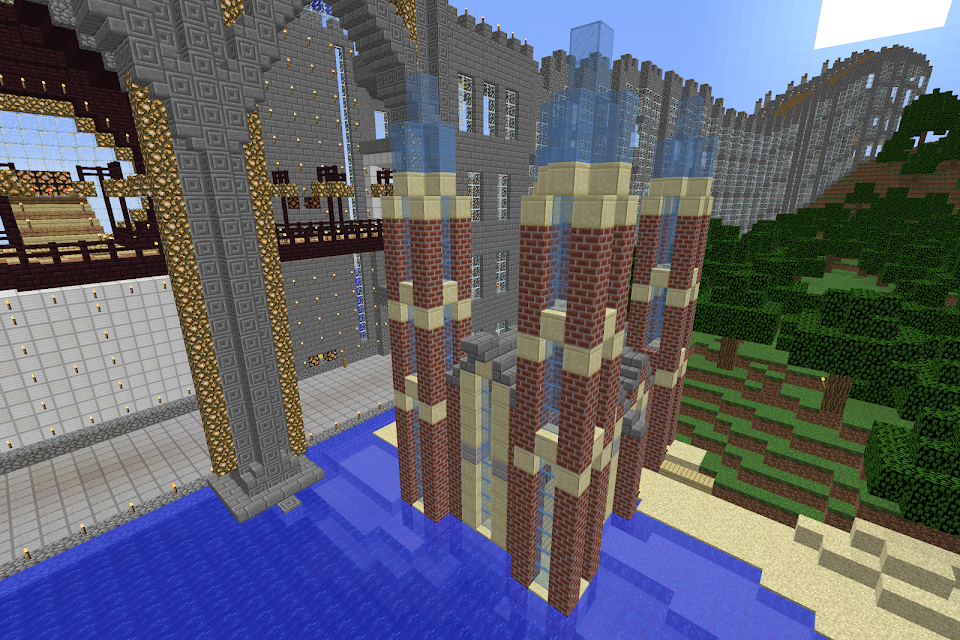 Next we have the new station at Westbridge (Blue Line). I fancied doing a low, long arc. I needed to extend the land a little. 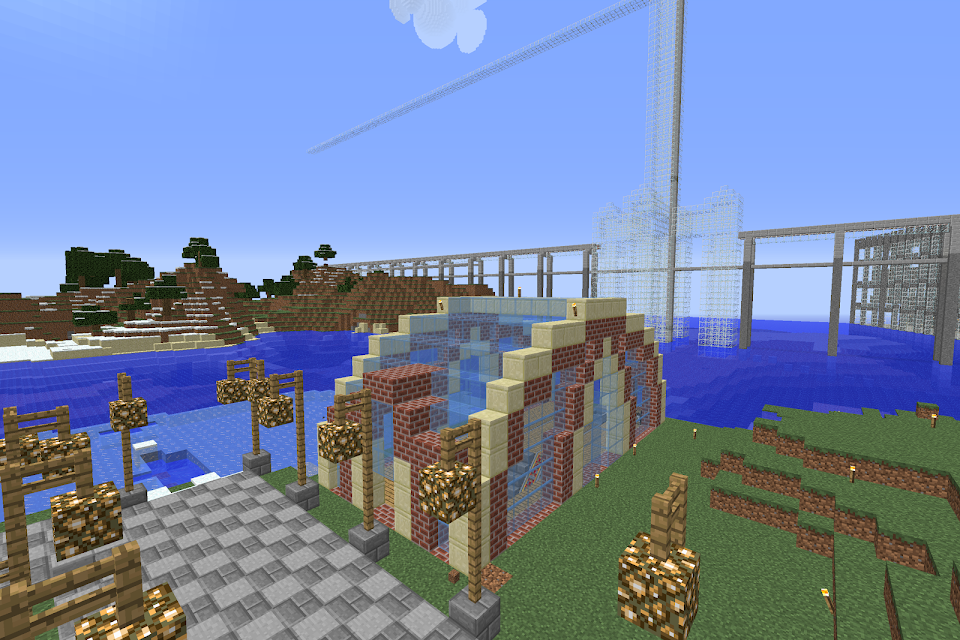 The stations are lacking any visitor information right now, but I intend on doing that when I do some more cartography.

Oh, and I hate tat the main entrance of the Westbridge station is obscured by the lighting.

Quick note on line colours - I've changed the Vomit Express (to CSA) to Green as it's more appropriate! I'm now changing the Hellgate to Black. :)

Wonderful! You legend. I've finished removing the station from BIG CAVE! I've left the end of the Mythril line for now as it might come in handy for the Circle Line.

This one was a little bit of a challenge (enjoyable one!) compared to the others for a number of reasons:

I also found that when I needed wool for the Outcrop Cottage, the fastest way was to go by boat around the ice flows. So I made a little jetty too. There isn't much prettifying around it but I thought we might return there at some point to make it lovely.

So, to think of what's next. There are two places that I feel really need linking up: Big R's Tower and Byrn's Caffeine. Really unsure what to do about these ones.

As much as I like going through St. Spawncras, it would be handy to have a more circular route around the edge, a circle line if you will.

Hi mate. I'm looking at reworking the beach bunker/caffeine area a little to make it a bit of a better base of operations, and am happy to live with a bit of a walk to get there (plenty of tunnels from BC etc.). I'd leave my area/mithril for the time being, unless you're really raring to do it?

Thanks mate, good call. Happy to leave it for now until you're more settled. Going via St. Spawncras isn't a pain.

I want to sort out South Castle next, which is on the Red Line as is Uberstore, so it's easy to move back and forth. I'll be just along the wall from you!

Here's a little snap of Outcrop Cottage. I rather like it, perched up there all alert and proud with its pink curtains. I have had little bits and pieces of time and I've been toying with starting a new YouTube channel (called coppachops) for fun. Sadly, sleep deprivation isn't a good way to record videos, even for an egomaniac so I've been working on bits and pieces, most importantly: the Circle Line (map is updated). Before we get into that, here's the current state of Nordcastle I've started work on the Circle line that will end up running around the inside of the Ringwall. I started at the Creeper Hotel and and went to Big Rob's tower. Here's the junction under the Creeper Hotel. And here's the station at Big Rob's tower. It's currently discretely accessible from the shaft beneat the tower itself but I think there is an opportunity to run stairs from within the compound down into the station for easier access. To get onto this bit of the line you need to be going South (toward St. Spawncras) at the Creeper Hotel and hit the button at the Creeper Hotel stop. Once you ride over the detector rail then the Lightstone Railway will act as before. I'm running the line around to the Cathedral (the station will be in the crypt, which is on pause at the moment) then onto the Village and then onto Byrn's Bunker underneath caffeine.

I managed to delete the end "World" out of the map and then tested locally - it appears to create properly now so we're good to try that soon. I just need some more kit and we're good to go. Oh, and I need an evening that isn't mental.

HA now I can steal your channel name and use it to distribute crazy videos on flat earth theory, pro pigeon propaganda diatribes, and slanderous self help videos

Oooh, that sounds exciting. Let me know how it goes.

EMW and I had another End issue tonight but I managed to get it fixed. I've been into the End on the Realms server (rather than just locally as before) and I can't wait to give the dragon some shit. We're definitely going to need some more ladders and I think a couple of chests might be wise too. And some more diamond armour!