My body goes through periods of hating me. No gallbladder and a damaged spleen and pancreas means that sometimes I'm left going between the loo and my desk. Dizzy, sickening, weak and cotton-headed. After work, I have little energy left; very little creativity to plough into Icar. When it's bad, I'm no use at work and little use to my much understanding family. The only thing I appear to be able to do is potter around in Minecraft.

The act of aimless doing bits and pieces here and there. Fixing lightning damage, upgrading doors, adding flower beds, putting in new roads (Big R - there's now a road from West Gate (the bridge) to St. Spawncras), lighting a bit more and digging out a sliver or two from under glass lake, adding decor into rooms in the Vertical Slum.

Minecraft has become an escapist world I can dip into, do a bit of this-and-that and move on. It's a familiar home that gently evolves, with a sudden change every-so-often.

The Vertical Slum is done (on the outside). It needs some interiors done but I like dipping into those now and again as the mood takes me. Cloudship Atlantis needs three more buildings and its complete. I'm going to take a bunch of resources up to sort that out. Uberstore is Uberugly. I'm going to add more turrets and nested roofs. I also want some kind of look-out because the view out north to the Fortress of Light from the roof is super.

The next Big Stuff thing I want to do is sort out South Castle. It's a nice round structure but it's a bit short and there's no way to get a horse from inside the wall to out. That's a problem. I will remove the farm and house from the top of it and get turretting. There are loads of resources to do that, I over-resourced for the Vertical Slum.

I want to create a tall white tower out of Diorite. Not sure where. I might do it on the hill to the west of St. Spawncras behind Lack-Ex or on the peninsula to the west of the Colosseum.

In case you hadn't guessed, still enjoying it!

So, the Uberstore has been prettied, Cloudship Atlantis has its three more buildings, Vertical Slum has a few more interiors (still some stuff to do).

I've just tidied up and lit the area outside of the Uberstore. I'm going to make a stables (for my horse Super Lala Coo Coo) and a pub that will take a feed from the melon farm. 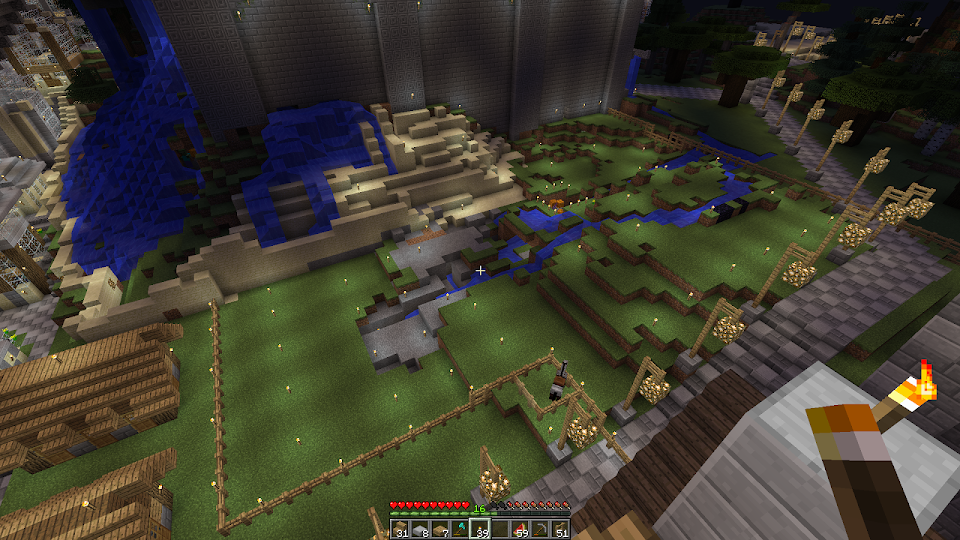 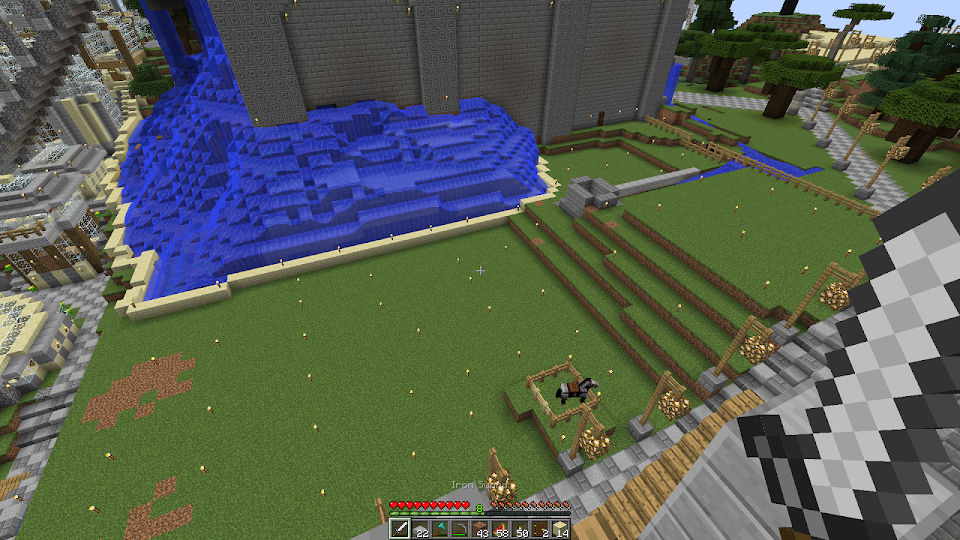 I really like Big R's idea of lighting everything inside Ringwall and I think fencing off, lighting and then building is a good way to go.

I'll do a postcards post with the new buildings another time, it's now time for bed!